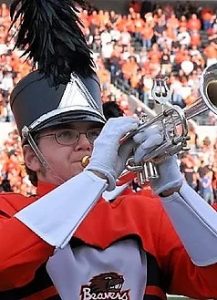 Trevor graduated from Oregon State University with a Bachelor of Arts in Music, and during his time there, he played principle trumpet in the OSU Wind Ensemble, was section leader in the marching band, and played with the pep band and trumpet choir. He has been playing trumpet since he started band back in the fifth grade, and has studied privately for just as long. He has studied with Jay Chen, Andy Plamondon, William Berry, and has had the pleasure of playing with Allen Vizzutti (even if it was only for one brief performance).

He has played in many different ensembles throughout his career, and has traveled to six different countries in Europe, performed in Japan, as well as Taiwan.

Trevor has been working at Windsmith Music since it opened in 2017. He is the store manager, and is also a brass repair technician, having studied under Mark Rasmussen.

He is married and has two daughters, named Elizabeth and Samantha. He currently resides here in Philomath, Oregon.